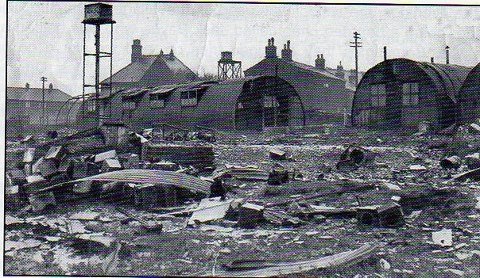 World war 2 army camp on Law Lane opposite the school. 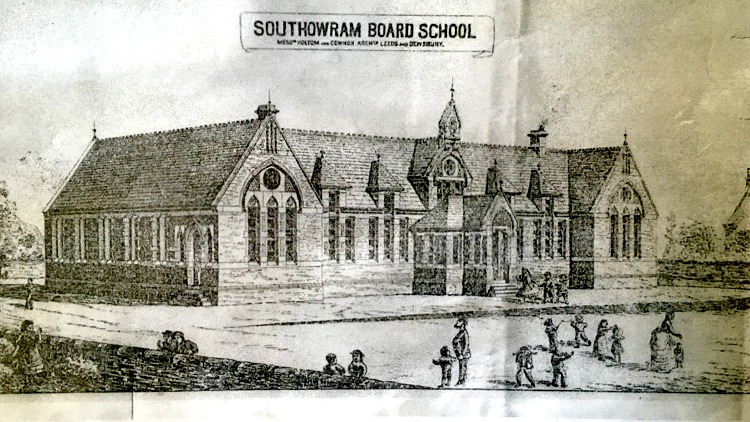 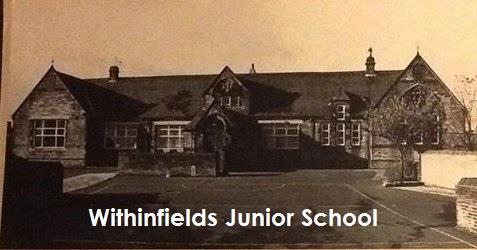 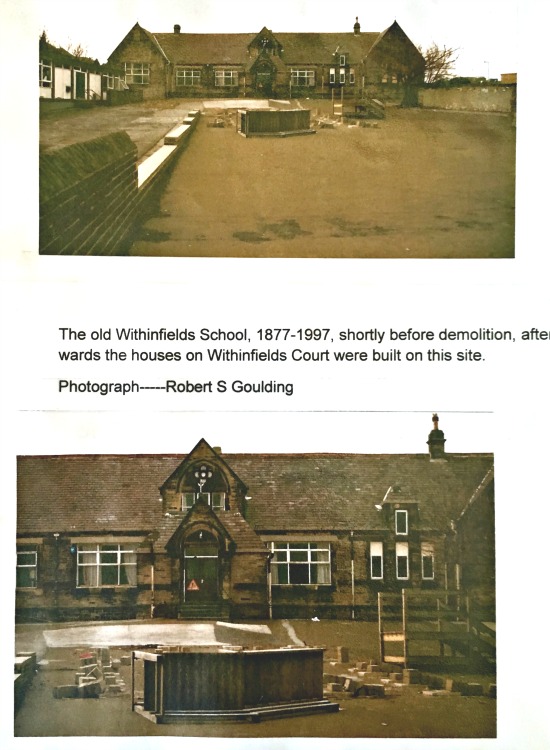 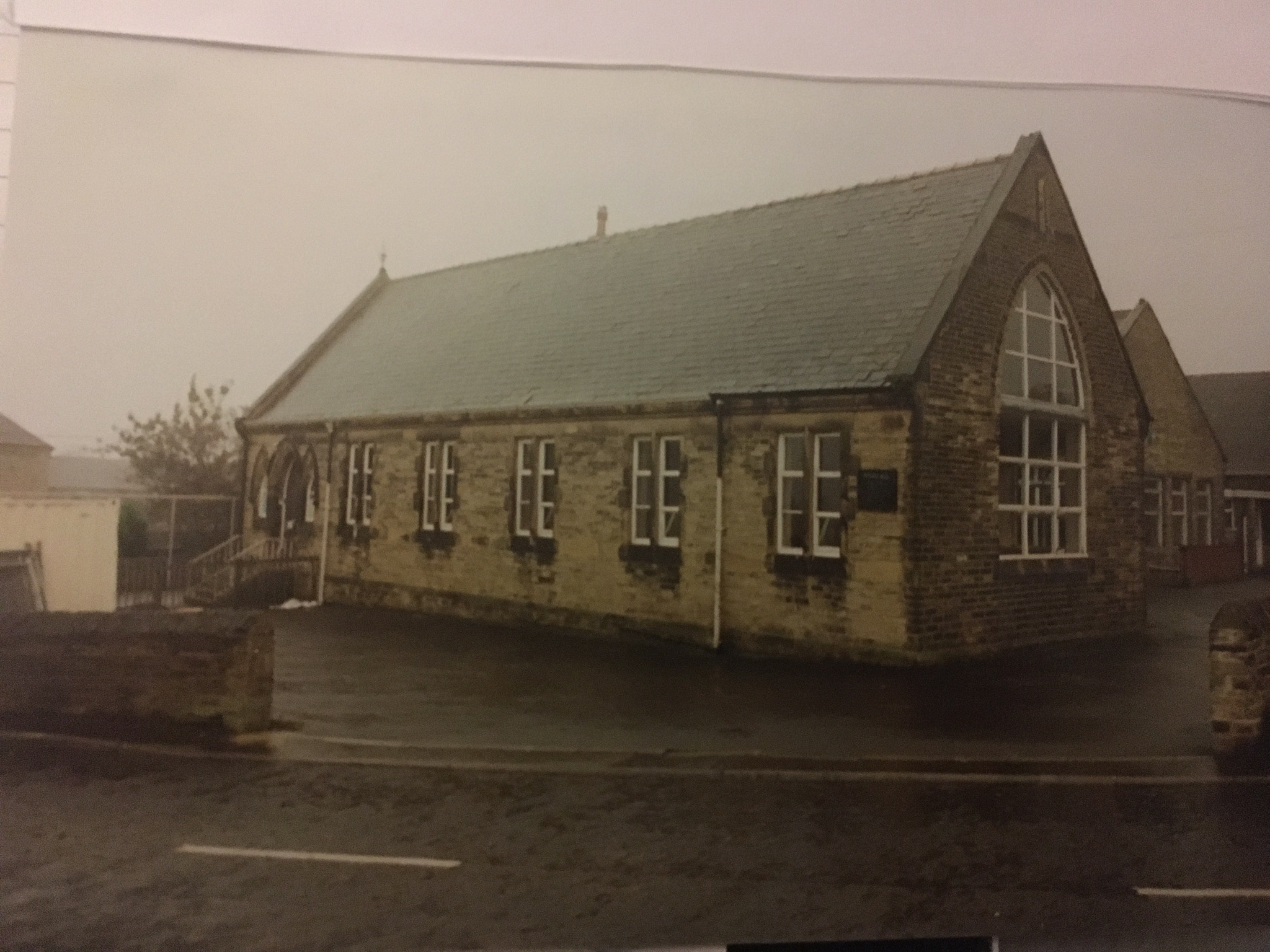 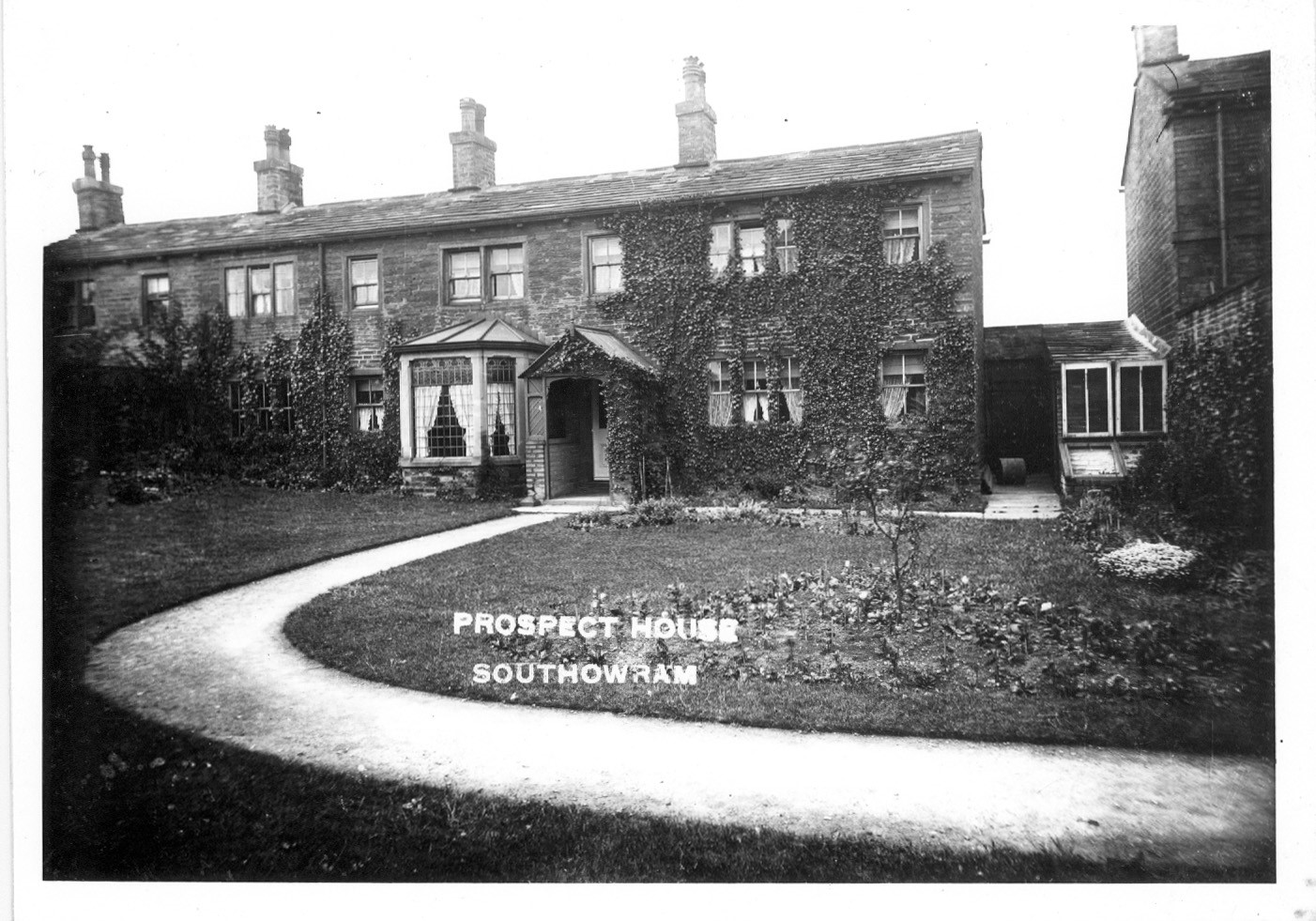 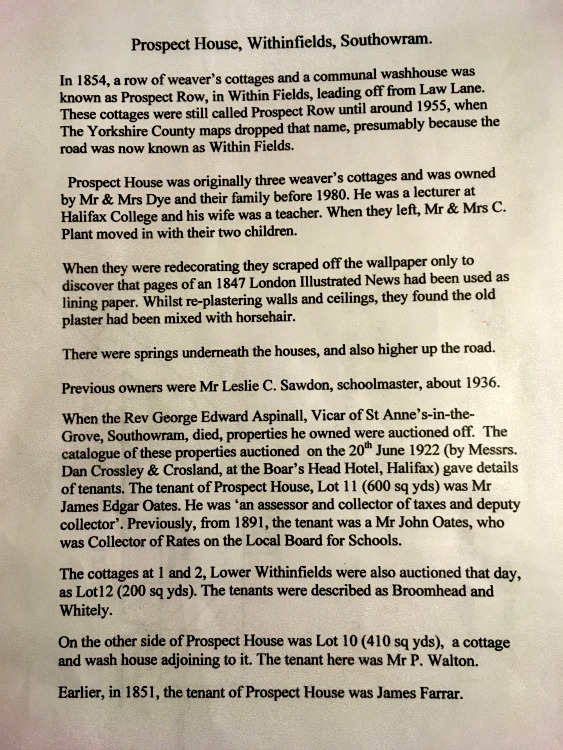 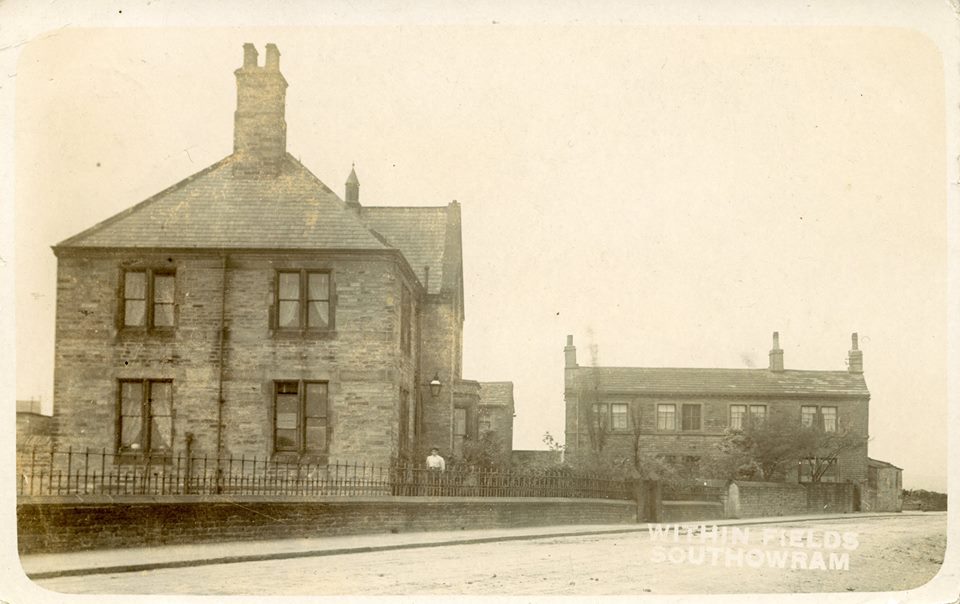 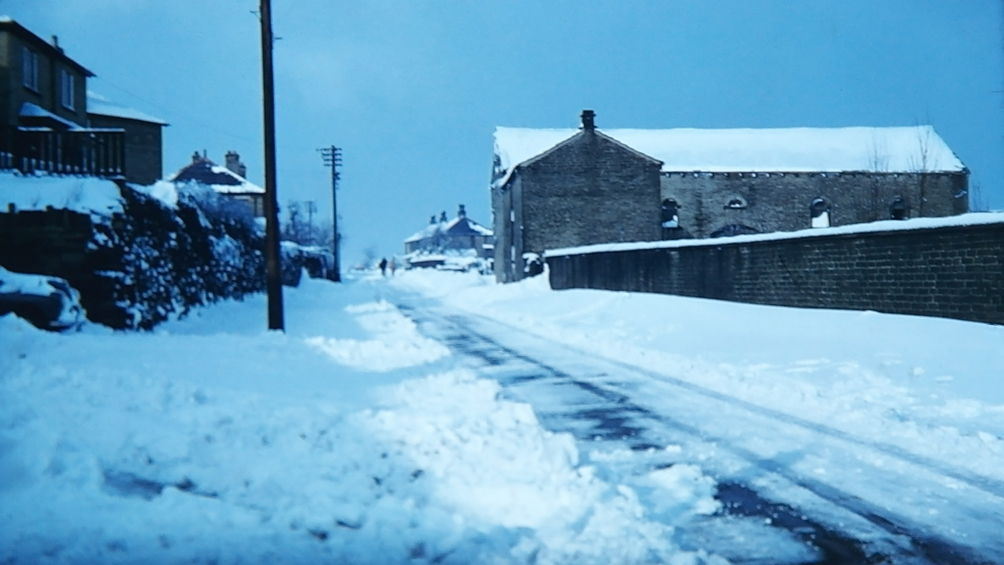 Law Lane in 1957.
The view, from the former chemist shop at 16 Law Lane is looking north towards Townley Avenue and Withinfields.
The long garden wall right of shot borders the former Yew Trees House, then owned by a branch of the Marshall family.
The barn centre mid-distance was, I believe, used by green-grocer Albert Naylor to house his horse and green-grocery delivery cart. 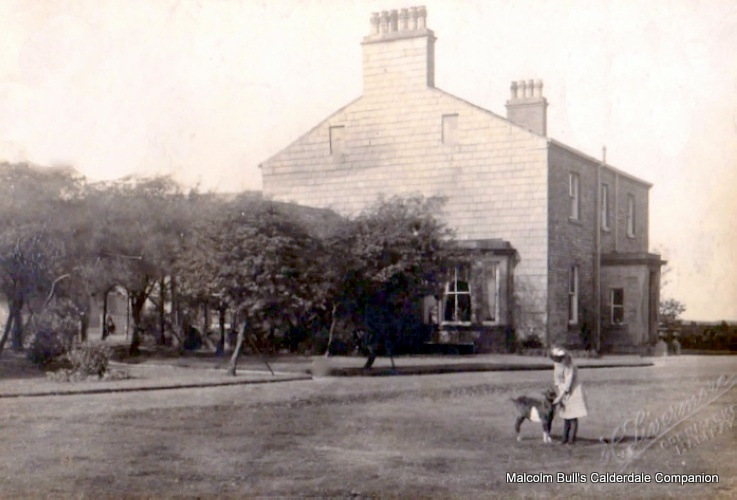 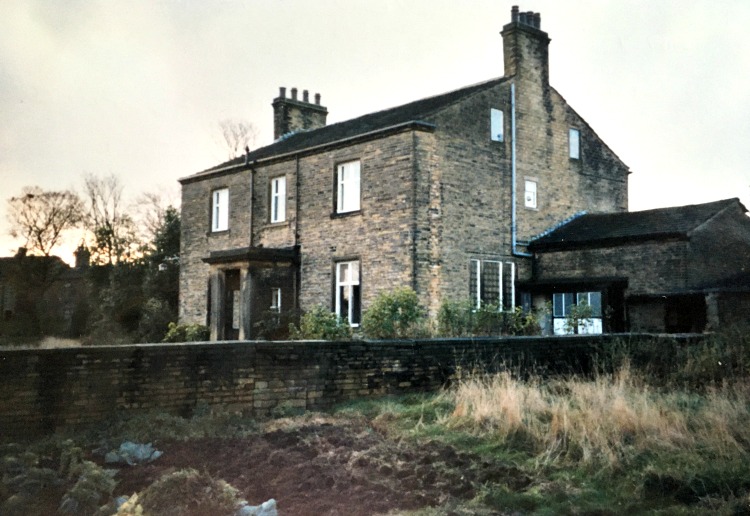 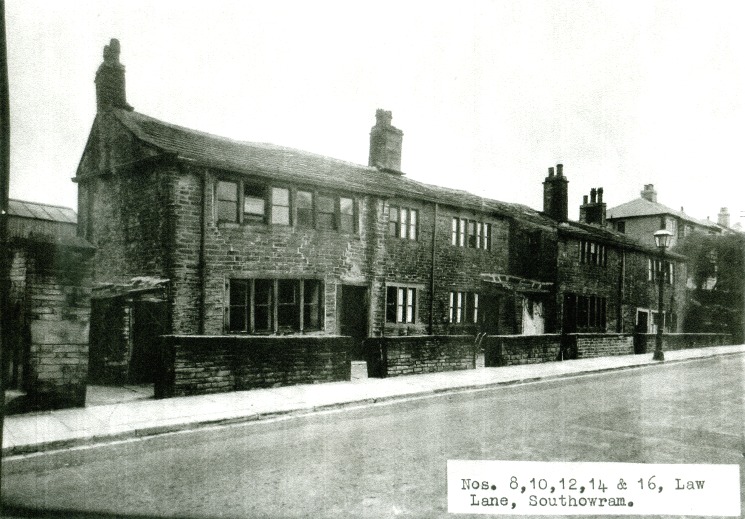 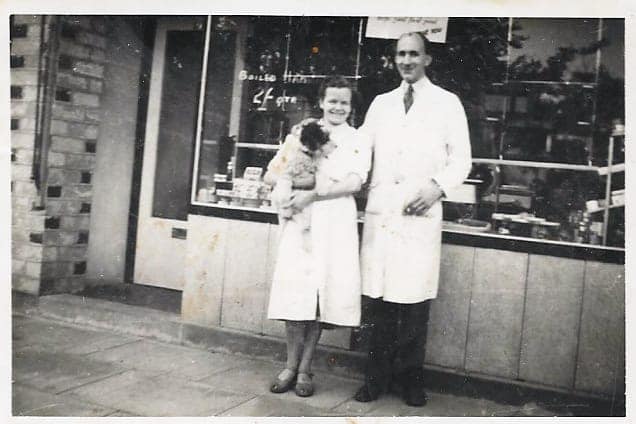 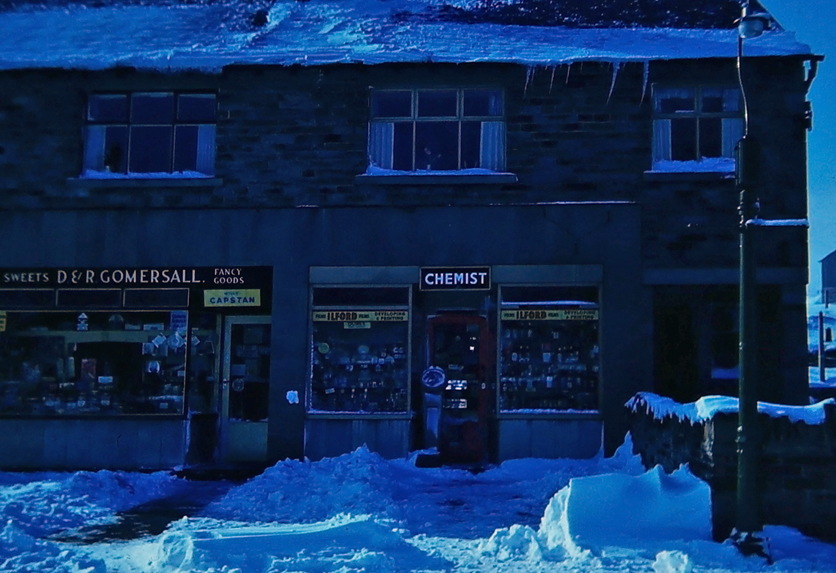 The chemist shop was opened and run by Frank Harrison from 1953/54 until his retirement in 1992. It is currently a sandwich shop cafe, the chemist having moved to the doctor's surgery further along Law Lane.
The sweet shop next door has seen many owners over the years. It was opened by Mr and Mrs Murray in the early 1950s. It then passed to Mr and Mrs Gomersall (the name seen here) in the mid-1950s. Mr and Mrs Farrell took over in the late 1950s. Gerry Morrison, on the retirement of Mr Doran, at the far end of Towngate, applied for the Southowram Post Office being transferred here in the early 1960s. 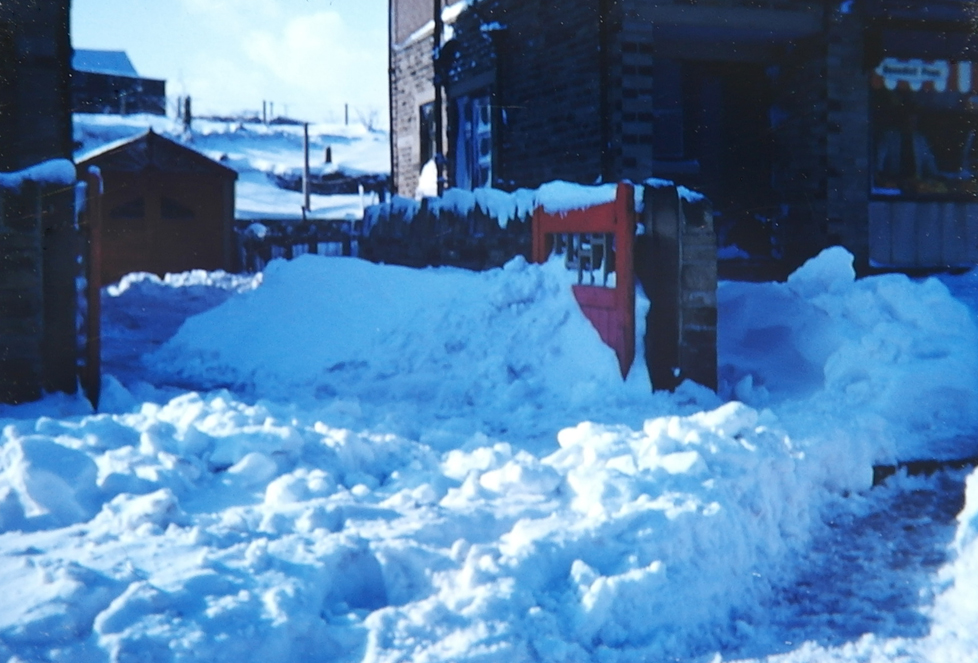 Law Lane from 1957.
The snow here is in and outside the driveway to the former chemist shop at 16 Law Lane. The small, stone garden wall is no more.
The pre-fabricated garage, typical of the day, had an asbestos roof, the main danger then being its weakness to withstand walking weight, particularly from playing children.
The blocks right and left of the driveway were built in the early 1950s by Brighouse builder, Colin Whitehead on land originally owned by local quarryman, Benny Thompson. The shop, left mid-distance, for many years a fish and chips shop, was opened as a green-grocers by Mr and Mrs Albert Naylor. Albert also toured local streets with a horse-drawn, ornate, green cart. The building above the hillside gardens in the background is a wooden garage in land known as The Field. 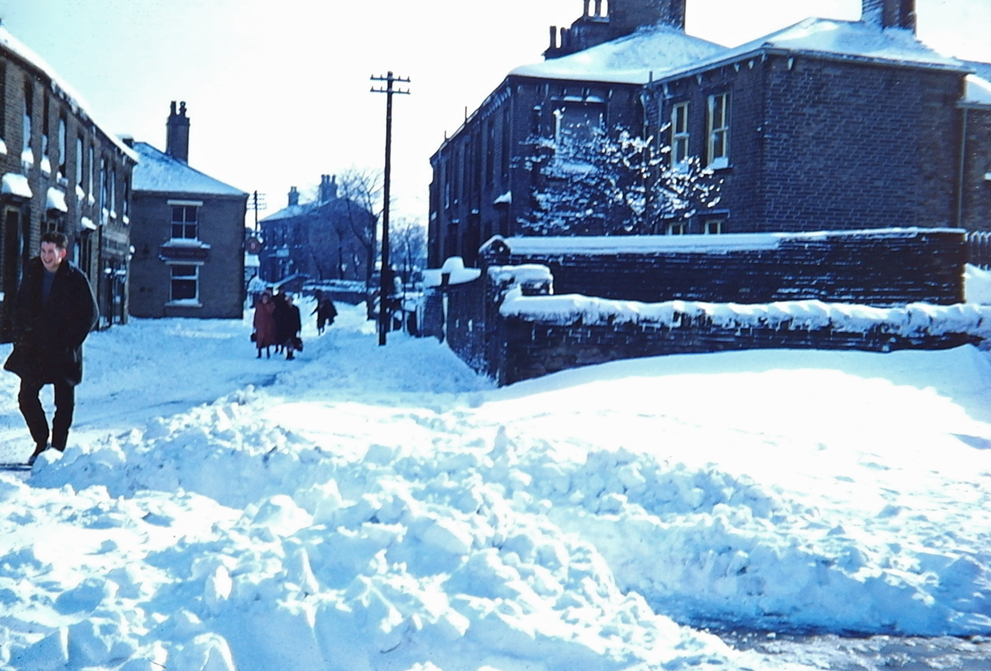 Law Lane in deep snow (1957) towards Cain Lane and Towngate from the former chemist shop at 16 Law Lane.
The Southowram Library has for many years occupied the site right foreground.
The house set back, right mid-distance, was occupied by the local Southowram Policeman, the last occupant, I believe, being Alan Marshal. Green-grocer, Fred Lees, also moved to a shop in the terrace right mid-distance, his original shop being located in a 17th century residence (long demolished) at the corner of Pinnar Lane and what in those days was a rough track known as The Entry (now Yeadon Drive).
The Southowram Co-Op stands at the corner of Law Lane and Cain Lane, left mid-distance.
The Pack Horse Inn also stands left mid-distance.
The building centre background, along Towngate, was, at that time, occupied by a butcher's shop next to a newsagents run by Joan and Colin Barratt. The newsagents was taken over by Gordon Buckley around 1959/1960.
The roads in those days were often cleared by snow-ploughs fixed to Marshall stone wagons.
The shot was taken by my father, Frank Harrison, who was the chemist at Southowram from 1953/54 until retirement in 1992.
Robert Harrison

On 25th September 1948, this terraced cottage in Southowram, also known as Craggan, was the scene of most brutal murder. The seventy year old occupant, Ernest Hargreaves Westwood, was discovered by his neighbour just before noon of that day, lying on his bed with severe head injuries. He was rushed to Halifax Infirmary but died later in the afternoon. The crime outraged the hilltop village. Westwood had been a well-respected member of the community, serving as organist and choir master at the nearby Methodist church and despite having retired from his main career, he continued to work collecting small debts in the district.

Police did not have to wait long to find their culprit, who turned himself in the following Monday pleading “I didn’t mean to kill him. I lost my temper.” The murderer was Arthur George Osborne, a twenty-eight year old originally from Bognor Regis, who’d been living locally for several years. He was recently unemployed, whilst his wife had been committed to Storthes Hall mental hospital in Kirklees. He claimed that the murder was the result of a burglary that had gone wrong and he had only killed Westwood accidentally during a confrontation, striking him on the head several times with the handle of the screwdriver he’d used to effect entry.

During the trial, it emerged that not only was Osborne a murderer, he was also a potential bigamist. A second marriage to a girl in Chichester had been due to take place on the day of the murder but it was cancelled when he failed to appear. Despite a recommendation by the defense that he be charged with the lesser crime of manslaughter, the jury returned a verdict of murder on December 1st. At this time, all such verdicts carried a mandatory capital sentence and whilst the judge appealed for clemency, the Home Secretary saw no reason to make an exception and Osborne was hanged at Armley Jail on December 30th 1948.

The house on Law Lane in which the murder had taken place remained empty for a couple of years after the act, during which time it acquired something of an evil reputation amongst local folk, scarcely surprising for a building with such a macabre history and air of abandonment. When Police Constable Vincent Egan moved into the cottage with his wife in 1950, they were fully aware of its past but remained undeterred. Nonetheless, prior to their subsequent departure from the village in January 1954, Mrs. Egan told the Brighouse Echo of a mysterious disturbance she’d experienced during her first week in the house. I

t was a dark and stormy night, as is so often the case in such stories, not to mention in the hilltop village of Southowram. Her husband had gone out to walk his evening beat so Mrs. Egan was alone in the house, which still lacked a “warm, occupied atmosphere”. No sooner had she gone to bed than she her heard a rapping from above her head and from the corner of her eye saw the trapdoor into the underdrawing seemingly rise and fall of it own accord. As it continued to do so, she fled the building to search for her husband. He assured her that it must be a draught but given the reputation of the house, many at the time thought otherwise. 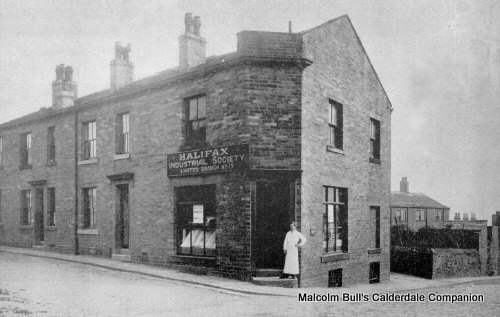 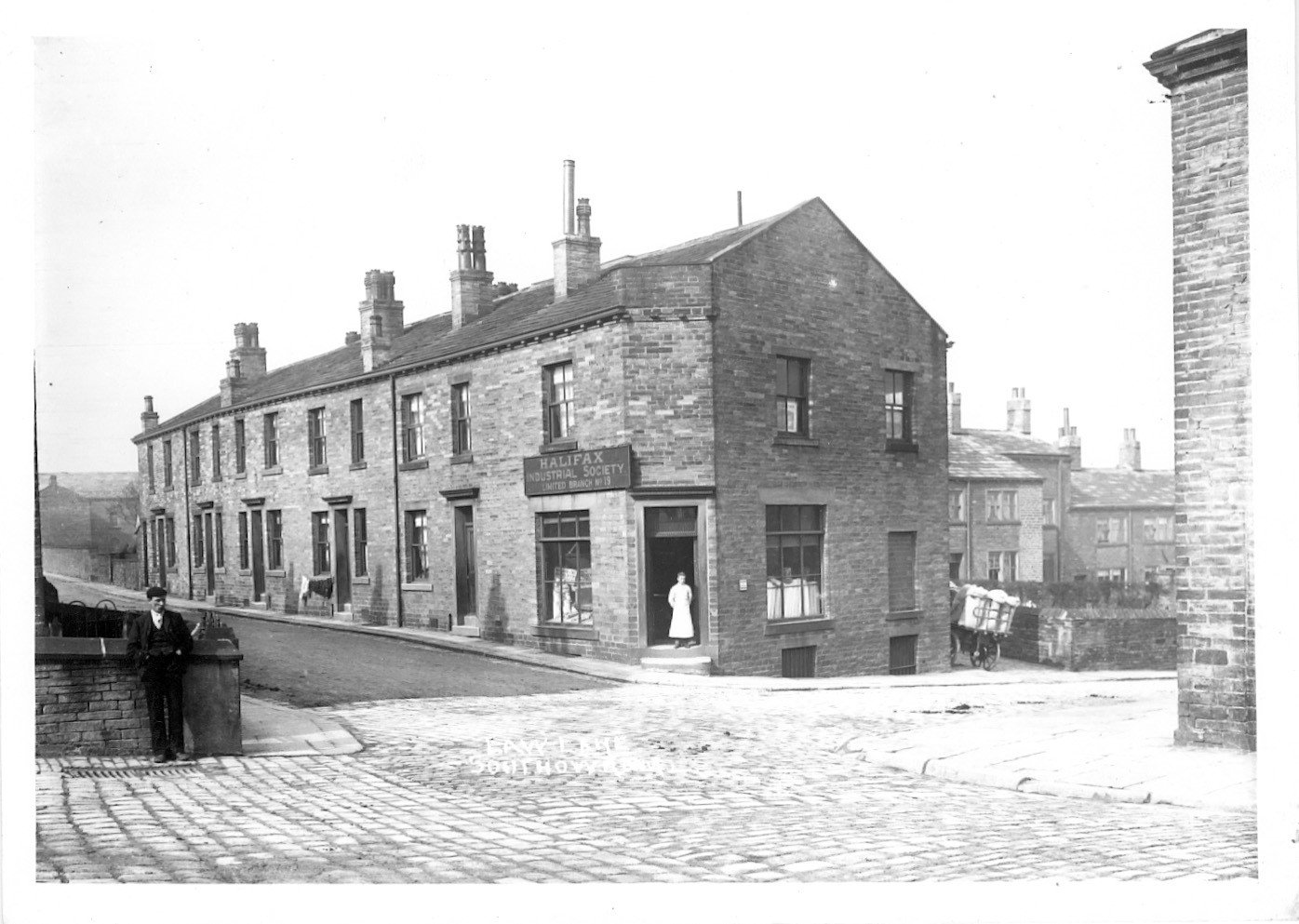 A view of Law Lane. The Southowram branch of the Halifax Industrial Society opened in November 1871. 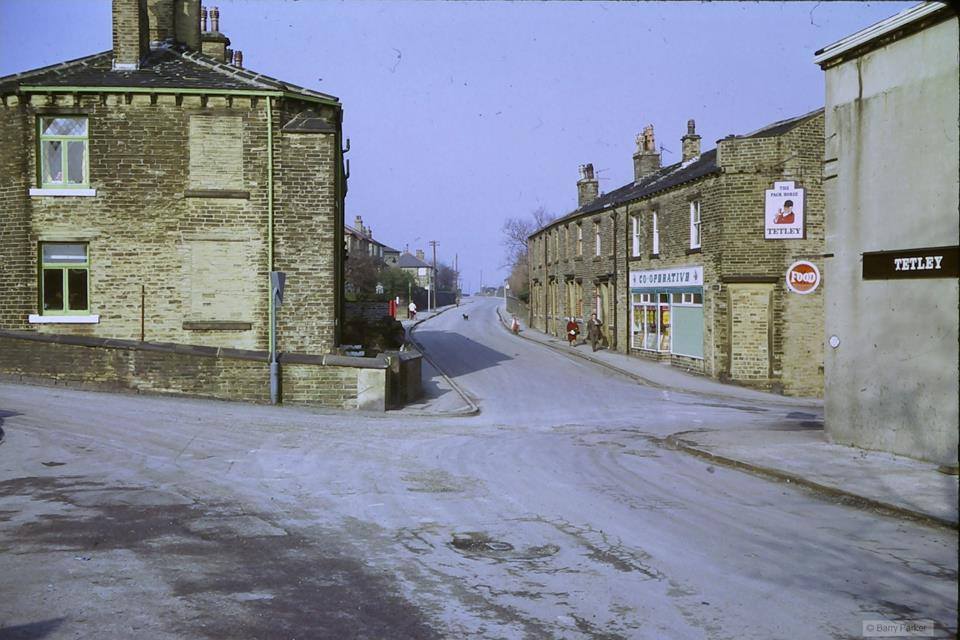 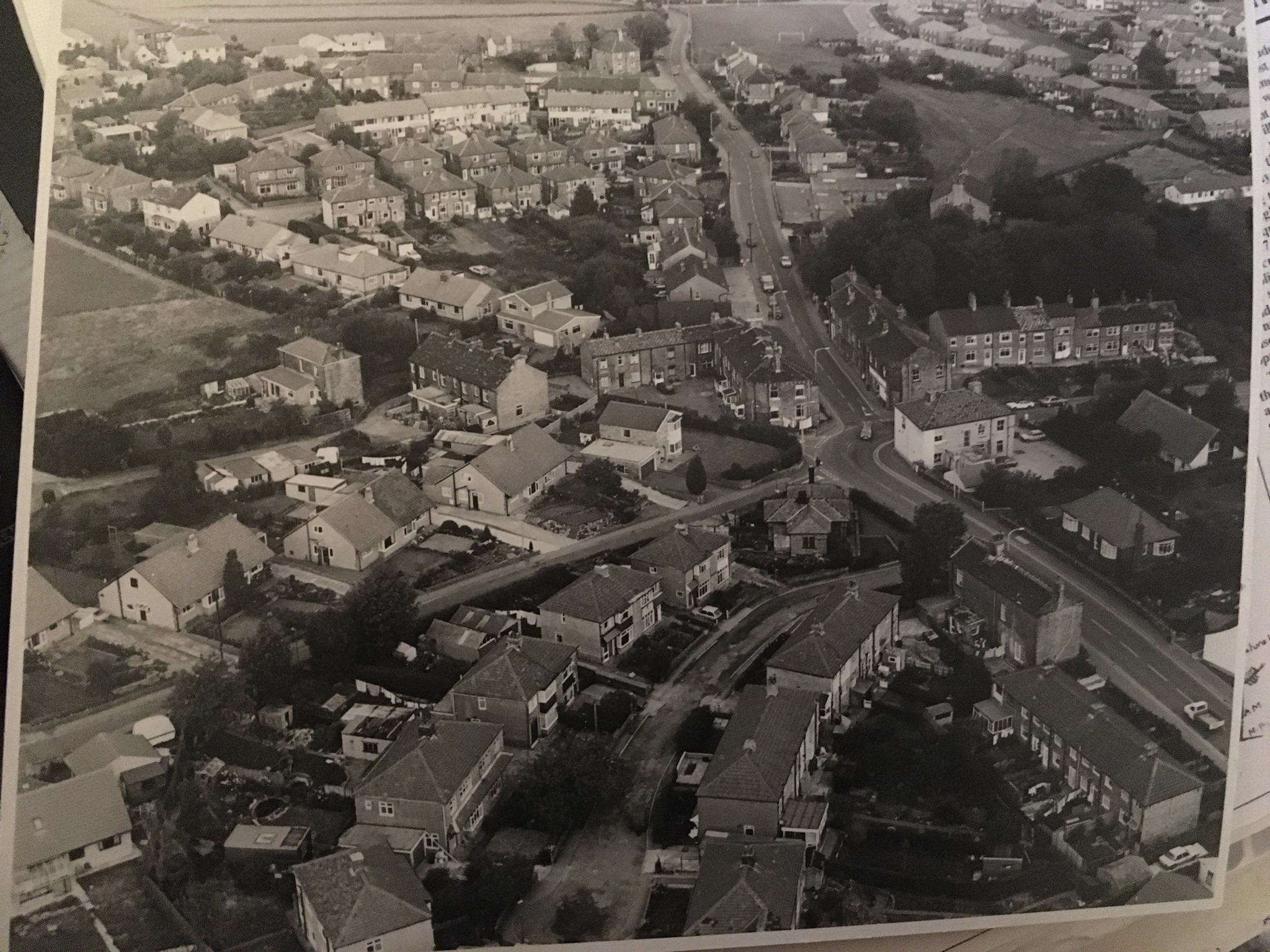 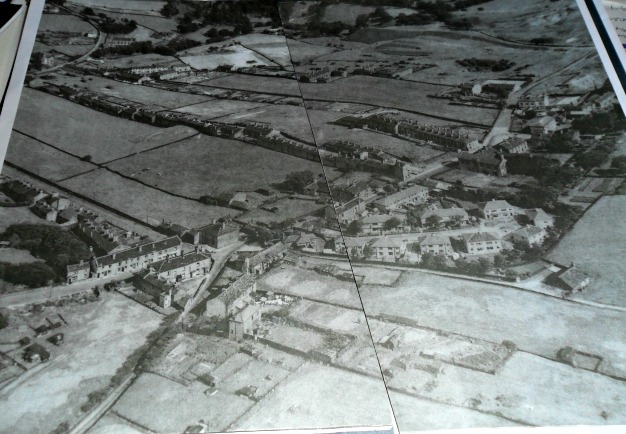 thanks to Jenny McGall for this picture 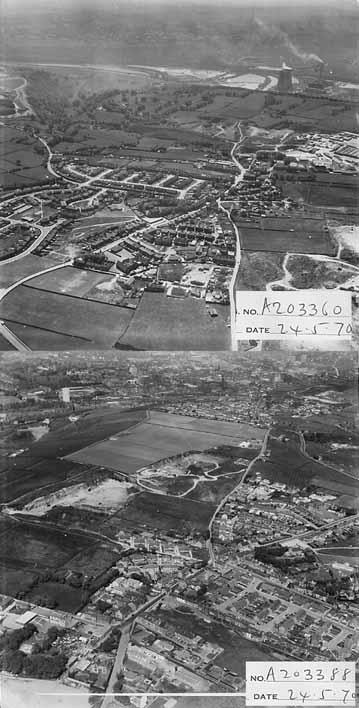 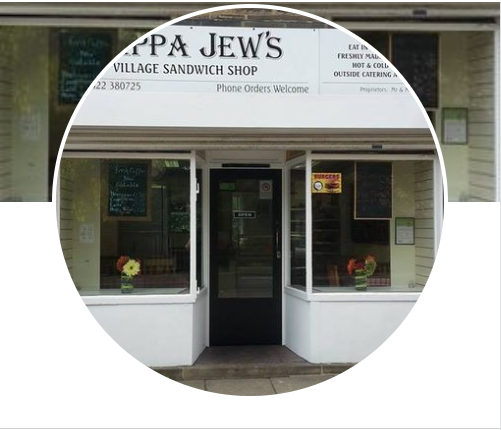