In reference to the 'Old photos of Southowram' page 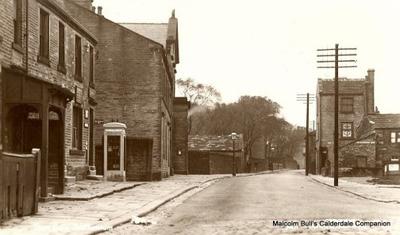 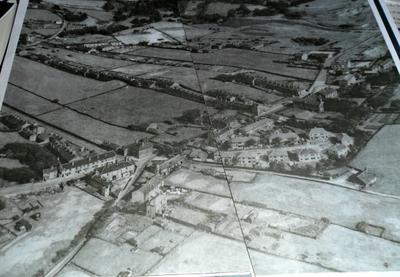 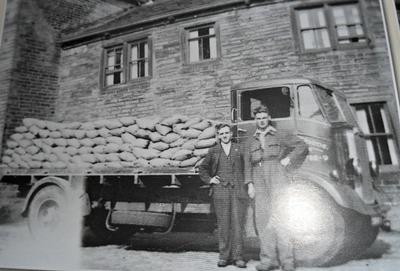 Under the wooden canopy is Broomhead's Fish and chip Shop.
Next is a house followed by Mr.Peter Doran's Post Office, Sweets and Fancy Goods
Behind the telephone box is the entry to Winterhill then comes the British Legion
Further along is Fred Mattinson painter and decorator
and in the distance is the Newsagent and Mr.Swift the butcher (he lived in Bank Top)
On the Right just out of sight is the Economic Store on the corner of Providence Buildings
The lean to is Mrs.Early fish and greengrocer (she lived in Haily Hill Boothtown)
The tall building on the corner of New Street was Mr.Thornton Grocer whilst just out of sight in New Street is the Barber, Mr.Marshall, Trevor I think, and further down the street was Mrs.Riley Fish and Chips

Behind Mr Thornton, on Towngate was a Doctor's Surgery
and behind that again was a ladies' haberdasher.

JENNY McGILL'S aerial photo would be taken after 1948 as that was when the last four houses were built in The Park. I would suggest 1952/3 as the green grocer is still there (old farm) opposite the Pack Horse

THE PICTURE of a lorry is indeed one of Lincoln Shackleton and Sons'
The shorter man is Lloyd Shackleton and the taller is Big Jim Firth.
The lorry, I think, is a WD modified Thornycroft and at that period (1947/49) would have been purchased from the ex Army sale at Thorp Arch as new vehicles were unobtainable.
This lorry was on contract (C license) to a potato supplier in Goole hence the non Halifax phone number and the load it carries.
The picture is taken outside Lincoln and Eddie's homes, then numbered 14 and 13, in West Lane, opposite their Hall Ings Farm (now a garage)
The haulage business operated from premises down Hall Ings lane

I hope all this is of interest to someone