Tommy o' t' Salt Pie, up under Crow Hill had died at the age of 77 years. He was a long term employee (50 years) at the paper mills in Booth, and during that time he devoted his time to collecting "odd" things, and had assembled a collection that filled his cottage and the two sheds that he built to house his expanding collection. Tommy could not write: but he could read the adverts in the local press and the Exchange and Mart, and regularly got replies to adverts written for him.

On his death his widow arranged to have a sale and appointed Mr Harrison, a Halifax Auctioneer to list and dispose of all his items.

In all there was nearly 1000 items to dispose of, the day of the sale arrived, and it was hot, so hot that a number of the crowd of good hearted picnickers and prospective buyers fainted. It was also the type of sale that an enterprising local pie maker was able to make a bob or two selling his pies and in doing so providing distracting competition. 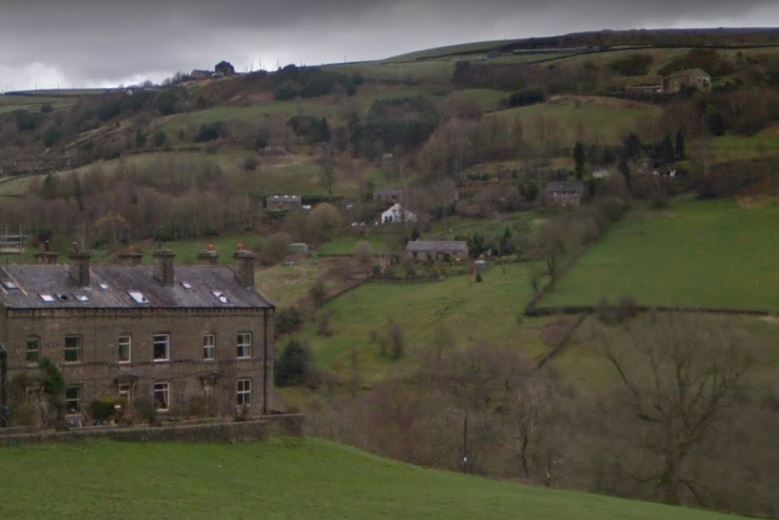 View from Booth towards the area of Salt Pie (centre) off the road from Stocks Lane (Wainstalls left and Luddenden to the right).

On the low roof of the cottage small items were piled, the rest being on the floor outside, Ornaments, utensils, tea-pots-one of three gallon and another of two gallon capacity with monster cups to go with them. A Russian coffin which eventually sold for 1s 2d, and was then opened by the auctioneer to reveal a large doll.

Tommy's two live parrots, and a pair of stuffed pigeons bearing an announcement that they too had lived with Tommy for over 31 years, sold for 4s 6d along with a stuffed canary.

A model of Mr Gladstone felling a tree sold with a monkey model for 1s 0d and a bust of Queen Victoria with some stuffed animals sold for two pence, but £2 10s in gold was paid for a cage marked "Made in Germany" containing two birds which sang when Mr. Harrison dropped a penny in the slot. The purchaser of this lot found that its value was almost doubled by the contents.

A street organ, hurdy-gurdies and musical boxes in the collection all had to be played before being knocked down, so the sale at times became a concert of old time popular airs. These instruments, like the many ingenious working models of figures that were Tommy's speciality, so were in good working order. So were his 63 clocks. There were curious walking sticks, and-selling privately for 35s,-- there was a 33cwt block of coal that he had built into one of the sheds 24 years earlier.

This sale of Tommy's life time acquisitions realised under £60 for his widow.

Salt Pie farm was situated on the eastern slopes of Crow Hill it was finally demolished in the 1950/60's.