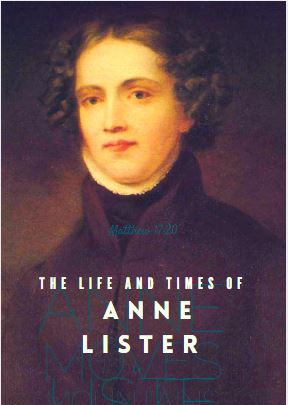 Anne Lister’s name rarely appears in print these days without some evocative adjective as a companion. Sometimes she is “the notorious Anne Lister”, sometimes “the brave Miss Lister”: often she is celebrated and occasionally she is persecuted, but now, some 200 years after her life, she is rarely ignored. This has not always been the case: at the time of her death in 1840 she managed only a two line obituary in the Leeds Mercury despite being an encyclopaedic diarist, an accomplished mountaineer, and a seasoned traveller. She was also a lesbian – today she is often hailed as “the first modern lesbian – which may help to explain why her story was hidden from view only to fully emerge almost 150 years after her death. She was born in  Halifax but it is difficult to ascertain the actual house in which the birth took place. All the available clues point to a house (now demolished) probably part of the Shibden estate, known as St Helen's. According to Anne herself, it was not Shibden Hall but for much of her life she lived there. Halifax folk have always had a fondness for the unusual and a grudging respect for people who did things differently.

This is as much the story of Shibden Hall as it is the story of Anne Lister. The two are intertwined and interdependent: it was the financial security provided by the Shibden estate that allowed Anne Lister to pursue her various interests and it was the same Anne Lister who remodelled the old Elizabethan manor house into the stately hall we know today. The first mention of Shibden Hall comes in the 14th century when it was the home of a cloth merchant called William Otes. During the next couple of centuries the house and the estate passed through the hands of several of the “noble” families of the area including the Savile’s of Elland and the Waterhouse family until it came into the hands of the Listers in the 17th century. This was a time when people tended not to relocate in distant parts of the country, when people married within the confines of their class, and when offspring had a tendency to expire before they could inherit the family pile and therefore it is not surprising that a timeline illustrating the ownership of Shibden Hall reads a little like a catalogue of the minor aristocracy of the West Riding.

She was born the eldest daughter of Jeremy Lister. One of the younger sons of the Lister family who, like many a younger son of the day, had carved out a career in the army, having seen active service in the American War of Independence. Once the war was over, however, he reverted to a relatively aimless life dedicated to spending the fortune he did not have. Anne spent her childhood in Market Weighton where the family owned some property, Shibden Hall having passed into the hands of Jeremy’s older brother and sister, James and Anne Lister.  As the two elder siblings were unmarried and Anne was the eldest surviving child, it was Anne who was destined to inherit the Shibden estate on the death of her uncle and aunt and in 1815 she moved into the Hall to live with them.

At about the same time, Anne started keeping a diary, and it is her diaries – all 26 volumes of them – that have established her place in history. Her diaries are of significance for a number of reasons. First of all there is the sheer scale of them: they run to over four million words – a substantial undertaking which make Samuel Pepys’ one and a half million words look like an afterthought.  And then there is the “secret nature” of them which at one point nearly resulted them being destroyed for their sinfulness whilst three quarters of a century later turned them into a highly successful BBC costume drama with a sprinkling of contemporary salaciousness. Whilst Anne managed to disguise most of her diary entries by nothing other than her cramped style of handwriting, she invented a special code, combining Greek letters and algebraic symbols, to hide the details of her lesbian conquests. The code was not deciphered until the early twentieth century and even then it was destined to lay hidden until the accepted social mores had caught up with real life.

Click here for a full and extensive blog all about Anne Lister and Shibden Hall which includes books and thesis as well as pictures and videos. 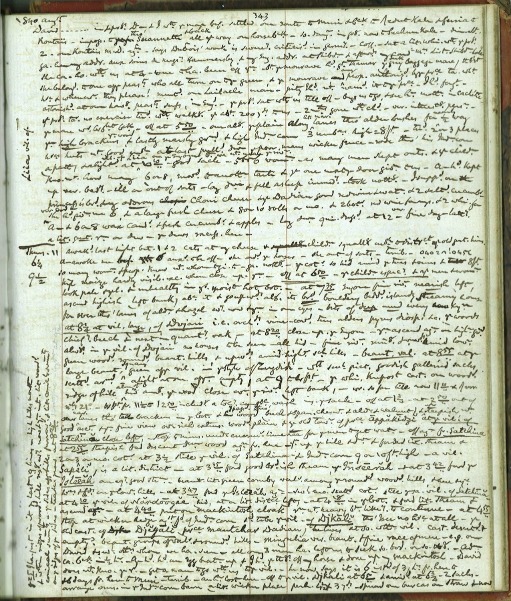 But her diaries have another fascinating aspect for the Halifax reader, for they provide a wonderful insight into Halifax life in the early nineteenth century. Hidden away amongst all the coded adolescent groping and the somewhat tedious lists of what she has read that day in her endless quest for intellectual self-improvement, there is an almost documentary quality to her descriptions of Halifax as a town. You can read her words and follow her down streets that still exist, to churches that still stand and visit shops that still existed when I was a child even though they have probably been transformed into a branch of Pound Land now. Indeed, one day I decided to follow in her footsteps and retrace the exact route she catalogues in her diary for a particular day in May, only to find myself collapsing exhausted into the Tap Room of a convenient pub at lunch-time from whence I was able to phone up my wife and order a lift home for my weary limbs.

Here is an example of a description of one of her short early evening strolls:

In the afternoon at 5.15 all set off over the top of Bairstow and Beacon Hill to walk to Stoney Royde to drink tea. Got there in 43 minutes. Spent a tolerably pleasant evening. … They were in Manchester on Tuesday and Wednesday. Went over to Mr Falconer – the dentist, said to be one of the best out of London. He told them nothing was so good for toothache as rubbing behind the ear on the side affected, till the skin was off, a mixture composed of equal parts of hartshorn, opium and sweet oil…. Got home in 38 minutes, along Church Lane and up the Old Bank, the typhus fever being very bad by the waterside about Bailey Hall”

The delight of the diaries is that they are a kind of historical Large Hadron Collider within which particles of local history, social history, domestic tittle-tattle and raunchy revelations keep bumping into one another and setting off sparks. In one moment she is fantasising about what she would do with Caroline Greenwood in a little shed on Skircoat Moor, and a few pages later she describes walking to Bailiff Bridge to examine the building of the new road there. As I write this, I can hear the traffic from that very same road, a palpable reminder of the magic of local history.  In some cases you are never quite sure whether the collisions took place or not. Emily Bronte was, for example, living and working about half a mile away from Anne Lister’s Shibden Hall in 1838 and it is fascinating to wonder whether they knew each other and whether some of the spirit of Anne Lister found its way into any of the Bronte novels. 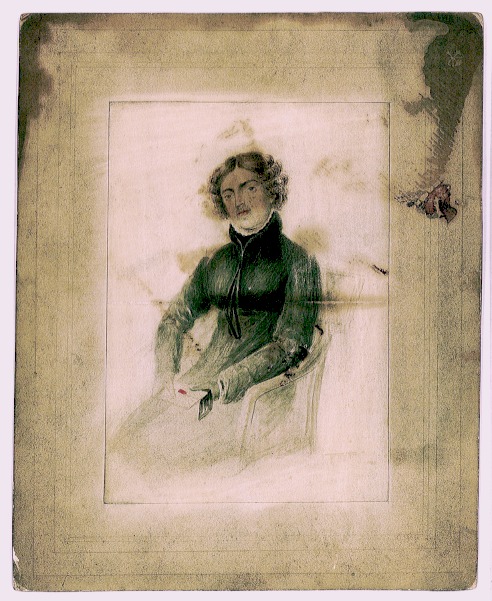 During the ten years between her moving to Shibden and the death of her Uncle James in 1826, Anne Lister spent most of her time living in Halifax. There were visits to such places as York, Manchester, London and even Paris, but these represented punctuations in what essentially was a Halifax story. Until she inherited her Uncle’s (and later, her Aunt’s) share of the estate her financial circumstances were limited and her diaries are replete with her efforts to make do and mend. She stumbles from affair to affair, endlessly fantasises about the daughters of the local squirearchy, gains a reputation for her strange ways amongst the local townspeople – amongst whom she is known as “Gentleman Jim” – and pens insults aimed at the local middle classes whom she despises.  When she is not doing any of those she is either practicing on her flute or working her way through classical literature or the works of the great philosophers. Anne Lister was not normal in any meaning of the word and, one suspects that in the best Halifax traditions she was quite proud of the fact.

When her uncle died in 1826 she inherited his share of the Shibden Hall estate, and whilst her Aunt lived for a further ten years, her failing health meant that Anne Lister became responsible for managing the Hall and the wider estate. She “restored” the old hall to an imagined reincarnation of something it never was – including the construction of an extraordinary Gothic Tower – in a manner which would scandalise modern-day conservationists. She also attempted to extend the family interests away from their concentration of agriculture to take advantage of the booming stone and coal mining industries. By this time she had also established a more long-term relationship with Ann Walker, a wealthy, if unstable, woman from Lightcliffe and in 1834 they underwent a form of marriage.

Perhaps such behaviour made even Halifax a somewhat uncomfortable location, or perhaps the renovations to Shibden Hall made living there unpleasant: for whatever reason Anne and Ann spent more of their time out of the country. Amongst other things, Anne Lister developed a considerable interest in mountain climbing and she was famed in France for her achievements in that sphere rather than for her sexual preferences. Her life was cut short when she died in 1840 whilst travelling with Ann Walker in Georgia and the Caucasus mountains. Following her death, Ann Walker inherited a lifetime interest in Shibden Hall but she was unable to take full advantage of it due to ill health. The estate eventually passed to another branch of the Lister family and following the death of John Lister – who was the first person to successfully break the diary code - in 1933, the Hall and parkland were given to Halifax Corporation.

We are submitting all the “People of Halifax” in this series to the ultimate “pint in a pub” test : would they be the kind of person you could happily go for a couple of pints in the Old Cock Hotel with. It is difficult to say with Anne Lister. She would certainly have plenty to say – she saw so much of the world she lived in and she had the intelligence to act as a fascinating observer and interpreter of life in the first half of the nineteenth century. But Anne was a dreadful snob and one suspects that she would have been unwilling to have gone for a pint with anyone below a Baronet in the aristocratic stakes. Unless, of course, you were a charming and personable young lady. 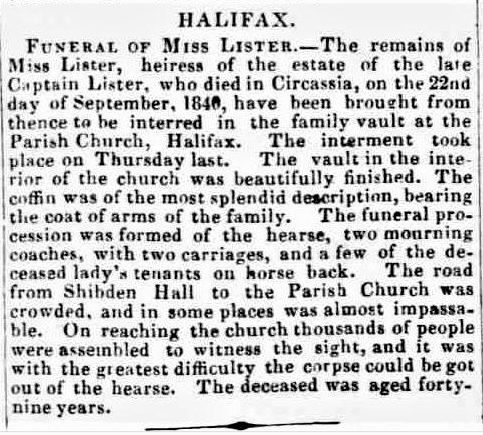 Return to Home Page from Anne-Lister