Whose Hands Are These? 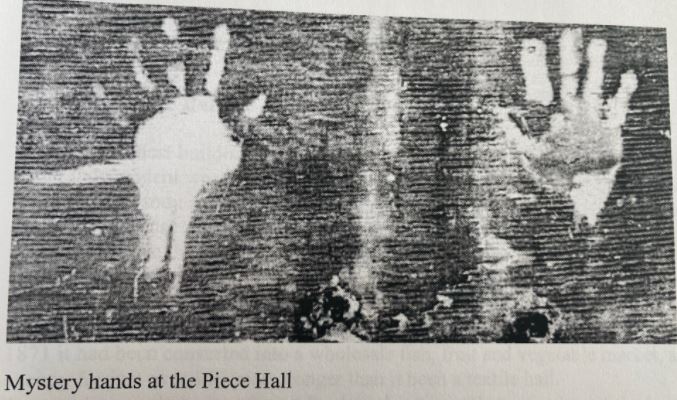 There must be a rational explanation for the riddle of the Piece Hall handprints. But what is it? "Flashback" revives a mini-mystery that used to intrigur Halifax people. And there is no reason why it should not still do so. But stone cleaning meant that the weird handprints on the right pilaster at the Westgate entrance to the Piece Hall became much less obvious than they once were. 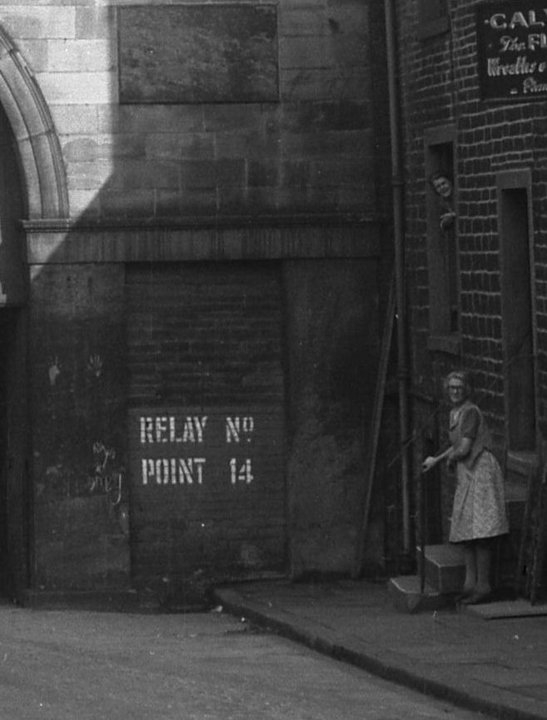 They can still be seen, however, at just above eye level. The print of a right hand remains very clear - an indentation into the stone that is the size of a large adult male hand. The left hand print is now very faint, however. The main picture (top) was taken in 1963, when the Piece Hall was still a wholesale fruit and veg market and it's stone was still blackened by industrial grime. Therefore, the hands stood out much more, almost white on black.

But, there was a riddle in this. Why had the area of the prints not blackened in the same way as the surrounding stone?

The second picture shows the general state of the Westgate entrance in the early 1960s. In the bottom picture the site has been cleared for the Market Street redevelopment that would be completed by 1970, including Westgate House, which towers over the Piece Hall. 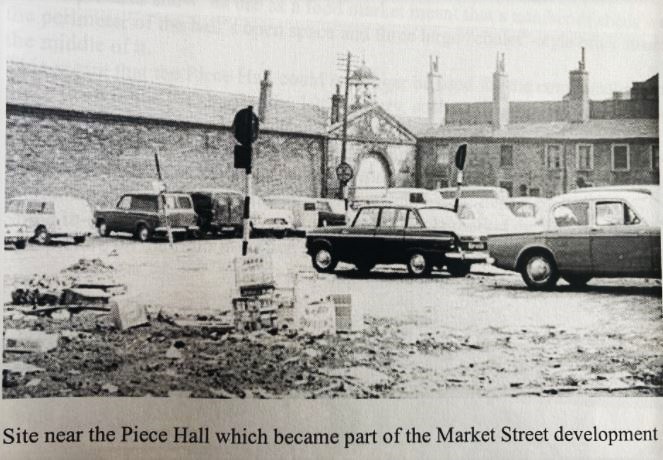 There have been several explanations. Needless to say, some have been fanciful, verging on the supernatural, such as the theory that they were made by the hands of a murderer and will therefore never fade and cannot be wiped away (although stone cleaning went some way towards this).

Another theory was that a worker in the fish market that was once part of the Piece Hall dipped his hands into some kind of cleansing liquid or disinfectant and, for whatever reason, placed his palms on the gateway, perhaps as a way of wiping them. The fluid would have had to be strong stuff to make an impression in stone.

The most detailed explanation came in the late 1940s when it was claimed that the hands may be those of a well known local pianist (and plumber) called Harry Maude, who lived on Hanson Lane and died in 1947.

His daughter went through his papers and found an account of an incident in 1890 when window cleaners who specialised in the thick, rough glass of mills and other industrial buildings were working at the Piece Hall and left a leather bottle lying around that contained a kind of acid that they used.

The young Mr Maude and some of his pals decided, for a lark, to fill their hands with this acid and use it to make imprints in the Piece Hall. This they did and never thought any more about it. If this is the explanation (and the prints are rather big for a young lad's), it was rather a reckless thing to do. Fortunately, whatever the "acid" was, it did not damage the hands of the future tradesman and pianist.