Halifax Pubs Past and Present Sa

Halifax Pubs Past and Present Sa

Fact - a previous name for the 'Allan Fold'

Fact - The original pub was connected to the 'Theatre Royale' on Southgate by the 'Ammonia Avenue' passage. The newer Shakespeare is now 'Romeo and Juliets' Italian Restaurant.

Fact - originally a shop (not the old West Vale pub)

The building is over 400 years old and has always been used as an Inn. It is thought to have been opened initially to serve the occupants of neighbouring cottages employed at the Corn Mill. The remains of the mill were removed to form the car park. 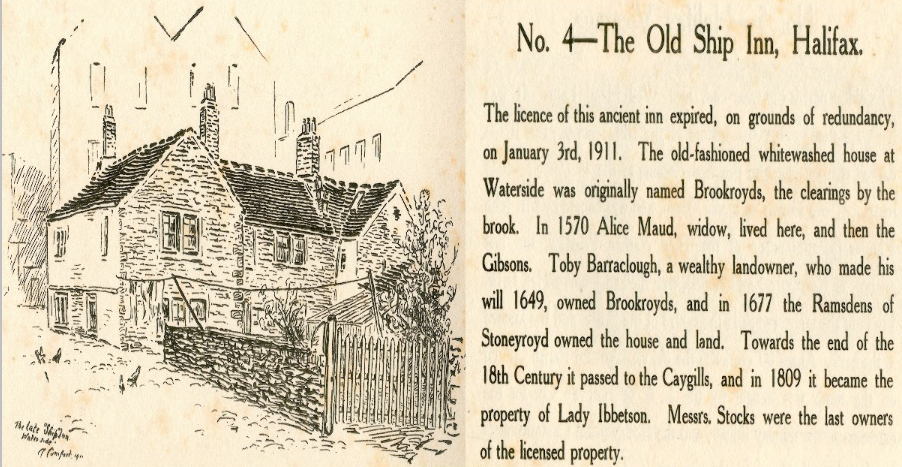 Passing along Water-lane, we come to an old fashioned stone mullion windowed house, now known as the "Ship Inn" or "The Old Ship Inn”. There seems to be no date about it, but its architecture tells us it was built in the 17th century. Now called Waterside, this house and the pleasant “ings” that once lay around it were known to our forefathers as "Brookroyds" - the clearings by the brook.

In 1570, Brookroyds belonged to or was tenanted by a family of the name of Maud -Alice Maud, widow, and Robert Maud, her eldest son, owning it; but before 1595, the Gibson family had taken up their abode there, two Richard Gibsons, father and son, being then its owners and occupiers.

Where? Bottom half of what is now 'Burtons'